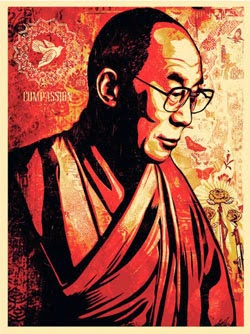 Tenzin Gyatso (1935 - ) is the 14th and current Dalai Lama. He won the Nobel Peace Prize in 1989, and is also well known for his lifelong advocacy for Tibetans inside and outside Tibet. The Dalai Lama has met with Pope Paul VI, Pope John Paul II, and with a delegation of Jewish teachers for extensive interfaith dialogue. He has met privately with Pope Benedict XVI,  with the Archbishop of Canterbury and other leaders of the Anglican Church, with Gordon B. Hinckley, President of the Church of Jesus Christ of Latter-day Saints (Mormons), as well as senior Eastern Orthodox Church, Muslim, Hindu, Jewish, and Sikh officials. The Dalai Lama is currently a member of the Board of World Religious Leaders as part of The Elijah Interfaith Institute and participated in the Third Meeting of the Board of World Religious Leaders in Amritsar, India,in November 2007 to discuss the topic of Love and Forgiveness. Tibetans traditionally believe him to be the reincarnation of his predecessors and a manifestation of the Bodhisattva of Compassion.