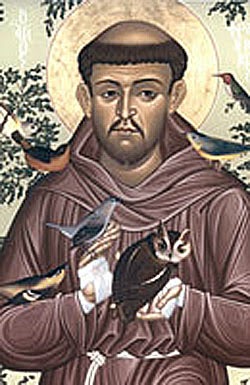 Saint Francis of Assisi (1181–1226), born Giovanni Francesco di Bernardone, was an Italian Catholic friar and preacher. While going off to war in 1204, Francis had a vision that directed him back to Assisi, where he lost his taste for his worldly life. On a pilgrimage to Rome, Francis begged with the beggars at St. Peter’s; the experience moved him to live in poverty. During the Crusades in 1219, Francis achieved personal rapprochement with the Muslim sultan who declared he would convert if possible. Francis died in 1226 while singing Psalm 141. He is one of the most venerated religious figures in history, and is known as the patron saint of animals; it is customary for Catholic and Anglican churches to hold ceremonies blessing animals on his feast day of October 4.